Early Saturday morning, an impressive electrical storm swept across Hampshire and Dorset, and this picture of mine made the BBC News Website. 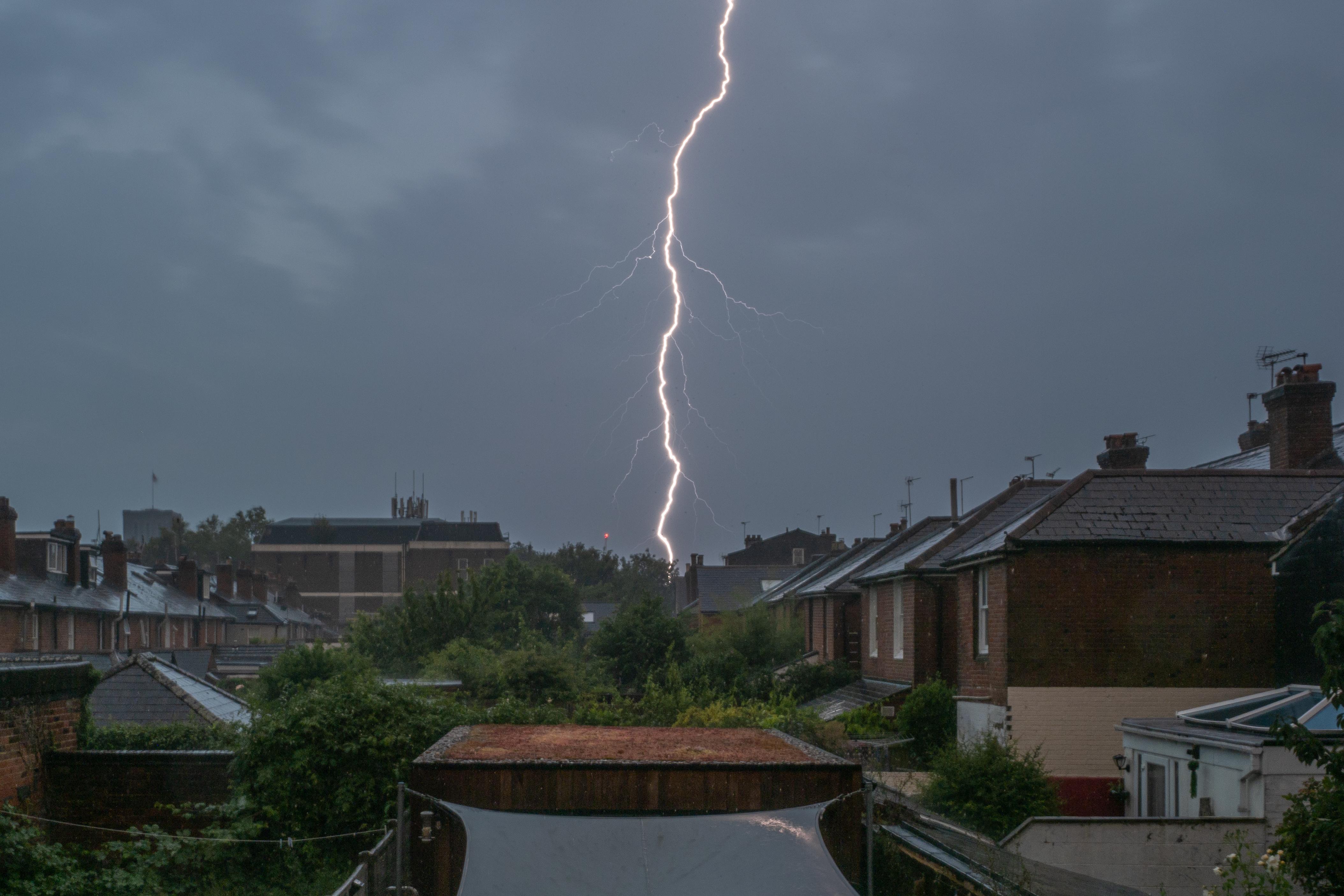 Photos like this create a wow moment, and it is a photo that has some luck behind it, but also some photographic skill of course - a lightning flash lasts no more than a fraction of a second normally, so how did I capture it?

I thought I'd write about the photographic techniques I used to capture this image, which believe it or not, I took from my bathroom window, sitting in the safety of my home.

So, first things first, let's get something out of the way, something obvious - do not put yourself in danger when taking images of electrical storms. I know that sounds like the most obvious thing in the world, but here are two examples of near misses of mine of a personal nature, when I was actually inside my house.

Back in 2018, there was a tremendous electrical storm one evening, and I was trying to think of the best way to capture it. We live in a tall, old Victorian house in the centre of Winchester. On that night, it was incredibly humid, the storm was pretty much right on top of the city centre. There were huge flashes of light with almost simultaneous bangs, almost no difference in time at all. On that night, even though there wasn't a direct hit on my house - I was standing on tippy toe with my wrists on the edge of a metal Velux loft window and my camera out into the rear of the house. There was a substantial discharge of static electricity that bolted up my left arm. Although it wasn't a proper lightening strike, it really, really hurt. So be careful.

The second time, a lightning strike was close enough to blow our broadband router to bits inside. This happened in August last year after an incredibly hot few days - the strike went down the phone wire and knocked out the router completely - this was on a surge protected socket, but it didn't matter - the lightning found another way.

I cannot stress this enough - be careful!

So how did I get this image? Well, like any shoot, part of the method is to prepare. I have a little app on my phone which tells me where the lightning strikes are happening - I could see that earlier in the evening before I went to sleep, they were to the South of Winchester - and as our Garden is broadly South facing, there was a possibility at some point we might get some storm action. At about 3.30, I was woken up by a huge crack of thunder, and then, every so often, for another 45 minutes or so, there would be another. But it wasn't until 4.30 or so that the storm really intensified. There were periods of intense rain, sheet lightning and huge bangs, but not much in the way of forked lightning like this one.

So, having tried and failed to capture any video of note, I moved to plan B.

I opened up the sash window in our bathroom which faces the right way, and set up my Olympus camera on a small tripod, and sat it on the windowsill.

Most modern digital cameras have a manual mode, and you can play around with long exposures in all sorts of ways. Consider capturing lightning like going fishing. You know that somewhere, there are fish, but you don't precisely know where they are, and at some point, there's a bit of right time/right place going to happen.

So if you set your camera to manual, you should find something called Bulb mode. All this means is that the shutter will stay open for as long as you're holding it down. Now, bear in mind, when I started shooting, it was dark - the sky was lit up only by flashes of light from the lightning. I have a few images of the sky being bright purple, but not a lightning bolt in sight!

So, what I chose to do is use a method called Live Time mode. What it does is capture a series of shorter exposures and add them together to build a composite image. It's a great way of capturing features at night - fireworks for example work brilliantly - but you have to keep things still!

I took this image on Christmas Day night using the same technique - I ran back and forth across the frame with a sparkler in big arcs! 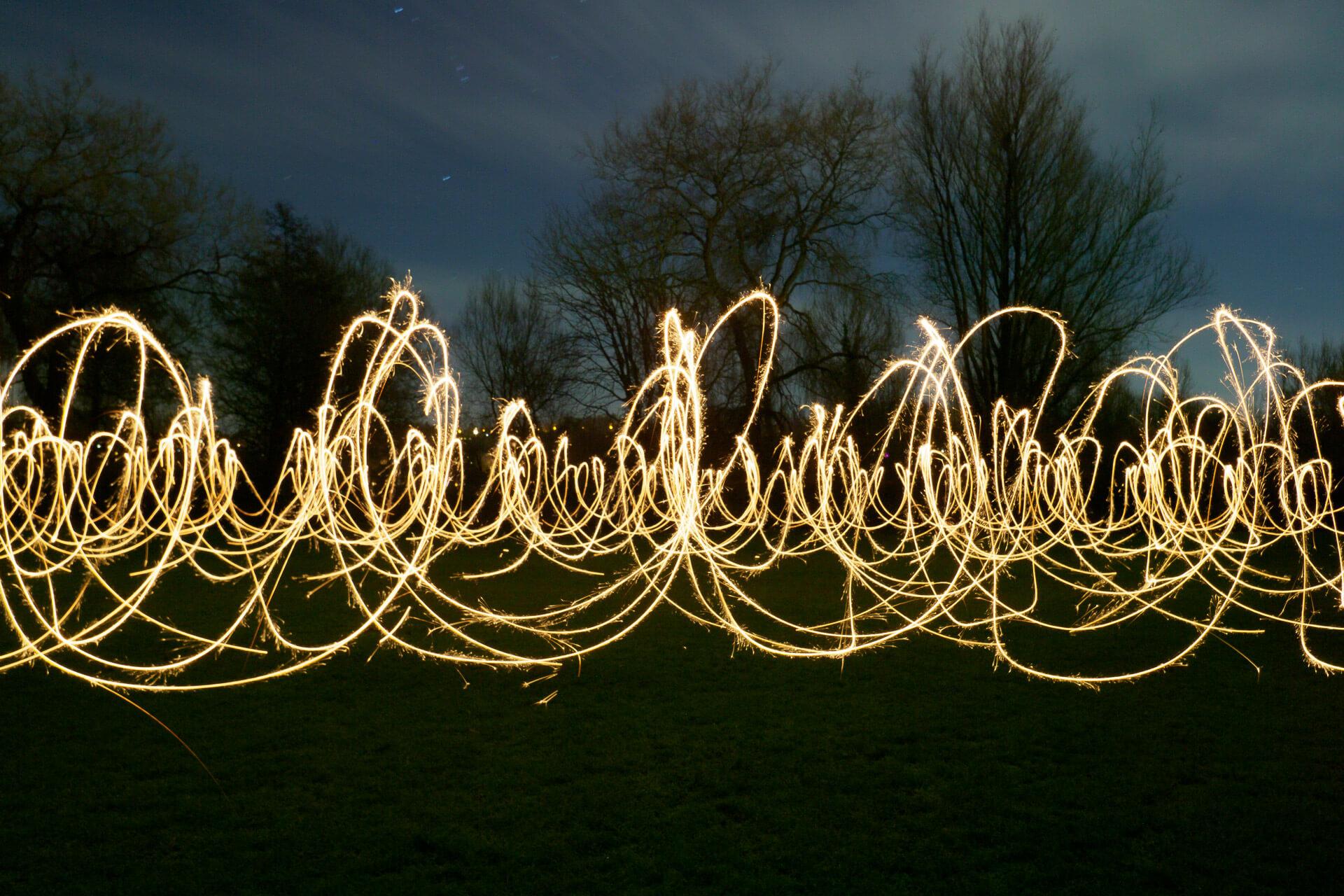 To capture the lightning, this is what I did. Using my little Manfrotto desktop tripod - I was sat on the stool, with my camera.

I used the following kit and settings:

Here's just a little more information about noise reduction if your camera has this option - this setting on a digital camera helps to manage the noise in long exposures - normally you'd keep this on, but you run the risk of missing the action - for every long exposure, the noise reduction doubles the time between shots. So if you have a 10 second long exposure, this adds another 10 seconds. When the exposure is even longer, it can be a real nuisance when you're shooting action shots. Where I've photographed fireworks or meteors, I've always turned it off and dealt with the noise reduction later.

What Live Time mode does is gradually build an image in your view finder. When you've got what you want, you stop the shutter.

On the Olympus, to find Live Time, set your camera to manual mode, and then set turn the dial to increase the shutter speed past 60 seconds - you'll find Bulb, Live Comp and Live Time modes are there. Live Comp works in a similar way, but I just prefer Live Time, it's a personal preference.

Remember, an important thing is that during early morning shoots regardless of where you are, the light will increase, so you have to ensure that the f stop you choose is monitored here. You can't adjust the shutter speed because you need the shutter open, and you can't lower the ISO because it is already at the lowest setting. So remember - keep an eye on your f number, and increase it as the light increases. In the same way, remember, if you're shooting towards and after sunset, you need to do the opposite, and adjust your f number downwards as the light fades.

This combination of low ISO and reasonably high f number means you can keep your shutter open for longer.

Now, there are other ways you can do this. You can use bulb mode on your camera, but bear in mind, you need absolutely no camera shake. So use a remote trigger if you have one. Live Time lets you monitor the scene, but Bulb mode works fine, it's just that Live Time takes some of the guess work out. With Bulb mode, you don't know what you've got until the image is finished.

What you then need to do is basically keep taking images. Sooner or later, the chances are there will be a lightning bolt in the right place. You can't predict precisely where, or what it will look like, but this one was a direct hit to earth with lovely little forks in it. I took about 30 images before I got one with a fork in the right place. I got another image with a fork, but it was too far off to the right, and the buildings were slightly blurred - remember - keep still!

Another thing to remember is this - rain. It was torrential, and even though I was inside, my camera lens was still affected by rain blown about and splashing off the windowsill. So every so often, you'll need to make sure your lens is free of rain spots.

Afterwards, I cropped the image a little to remove some of the flat roof from our house at the bottom of the frame and some annoying branches from a tree next door - I then just changed the highlights and shadow of the image, and changed a couple of settings in the blue and red channels for saturation purposes - that was it - all this was done in Lightroom.

Shooting lightning at night is much like shooting fireworks - they are intense bursts of light in a darkened environment. Using these settings gave me the best opportunity to balance out the intense light against the relative darkness in front of me.

Finally, here's what fireworks look like using Live Time mode - this was the first time I ever tried in 2015 using my then brand new Olympus EM-5 mark 2. I used a 12-50 kit lens for this, so don't be put off by the camera gear I use - you can take pictures like this too! 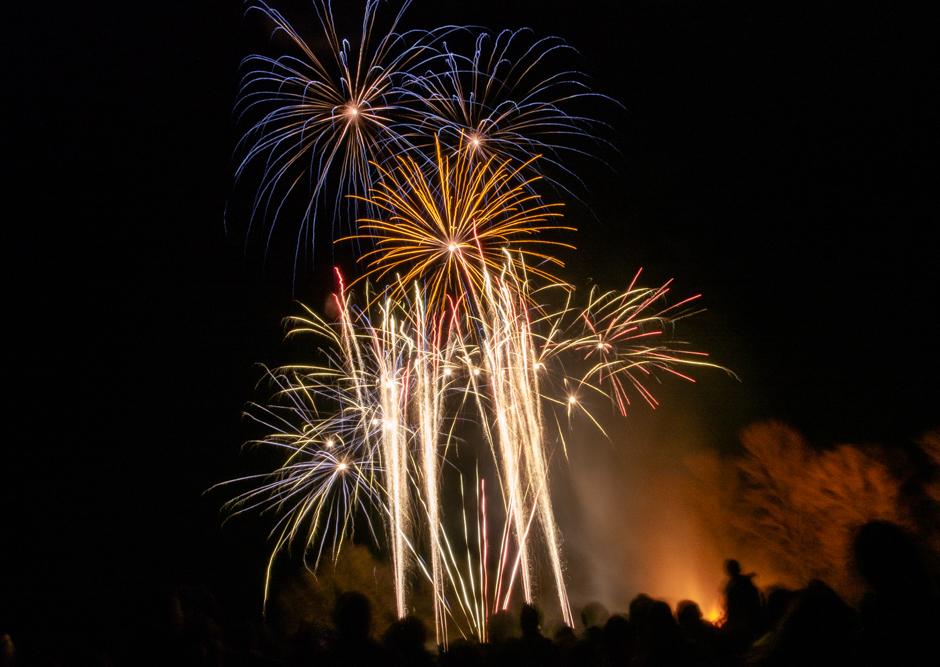 If you like this print, you can buy it in the gallery here.

I hope you've enjoyed this read - have a wander around the prints we have on offer, and feel free to get in touch - email me at mike@northwallgallery.com.

Until next time, stay safe, and keep looking through your viewfinder!